When one thinks of online strategy smartphone games and 1vs1 duels, the first thing that comes to mind is the great Clash Royale. A title that continues to amass popularity and has created a whole school of works that follow its pattern of gameplay. Castle Burn RTS Revolution for PC, at first sight, looks like a clone of Clash Royale more, but when we start playing we will see that it is only superficial: we are facing a strategy game much deeper and that gives freshness to a genre that risks rather little.

We talk a lot about “clones of Clash Royale“, but what characteristics define that phrase? At basic levels, we would have to say that they are 1vs1 games with a pseudo-zenith view where we will be playing units on the stage as we collect mana/energy/magic to destroy the enemy base while defending ours. And well, Castle Burn enters this definition perfectly. But to say that this work is a clone of Clash Royale would be a huge lie, readers friends. Castle Burn is closer to conventional computer strategy titles, although it does not deny the environment in which it is located.

Playing Castle Burn RTS Revolution for PC is much easier than explaining it with words. But let’s try it little by little. Although we will collect mana in a traditional way, the game allows us to create collectors in strategic points and changes in each game, of the map to obtain it more quickly. This mana, or energy or whatever you want to call it, will serve us both to create these buildings and to obtain units. And here comes another curious point: we will not have to create a predefined deck with which to play. Within each game we can “invoke” these cards to our game, having a limit of 6 per game. Therefore, we will only have to discover these cards previously to be able to play them. And as is the norm in the middle, we can raise the level in a traditional way.

But the game system with the cards does not stop there since we will also have several categories of units that we can invoke if our base has been updated by previously invoking a certain number. Yes, we know that sounds messy, but it is not so. In addition, we have a unit invocation limit that will be determined by the creation of barracks that will also allow us to increase our deployment rate in the mapping. Features that seem taken from the very Starcraft and that we love to find in a game with these characteristics.

We have been quite in love with Castle Burn, as it is a game that shows that you can do new things in genres rather than manidos. It is still a mixture of concepts taken from other titles, but at least it tries to stand out from the crowd of equal games. In addition, it also has a system of heroes to give more personalization to our team, different game modes so that we can not get bored and a visual section that is precious to the greatest extent.

To use Download Castle Burn RTS Revolution for PC. You first need to download and Install Emulator of Your Choice. Here is the List of Top 5 Emulators. or the Bluestacks 3 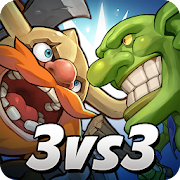